You listened to your mother, your father, your significant other, your bank account, your gut- which mostly made less than pertinent demands for cheese-; whoever it was, you were swayed into taking the wrong job. Maybe they had a nice building, maybe your boss didn’t seem that bad at the time, the fact of the matter is you’re here and you hate it.

This is how to identify that, in the words of the Bluth Family “you’ve made a huge mistake”, and to, hopefully, rectify it asap:

The First Day:
Initially, you are a bit chuffed with yourself for getting this job. This is of course before you realise what it entails. You are sitting in your new office-chic attire that you agonised over last night (gotta make a good first impression!) and are waiting to find out if people bring lunch in or eat out, and where the bathrooms are, and oh good there’s free tea! You meet the team who will surround you for however long it takes before you realise it’s time to bolt and you think “yeah I can do this”. Oh you sweet summer child…

The Alarm Bell:
This may start to ring right after you have barely finished thinking “yeah I can do this” or it may creep slowly up on you like a bad cold. However long it takes, when it rings, it rings loud and clear. Fog horns blow – perhaps literally if your new job is in a lighthouse, which would presumably be awful. Sirens whirr. This is not a drill. This could be because you don’t fit in, or the work just isn’t what you expected. Maybe Alan, the slightly more senior member of the team, has decided to haze you. It doesn’t matter. Listen to the bell.

“Who brings a megaphone to work Alan!? WHO!?”

Not Listening To The Bell:
Come on it can’t be that bad! You’ve had bad jobs before and you’ve managed to make the best of them. You delude yourself into thinking you’re writing the place off too quickly, and maybe you are. It’s always best to look on the bright-side and take things as they come. The bell is still ringing but you’re drowning it out and trying to make the most of the situation.

Failing At Making The Most Of The Situation:
Look, maintaining a positive attitude in the face of adversity is hard, just ask someone who’s lived through a war, or supported Ireland through a major sporting tournament. It can be draining. You come in every day, still hearing the bell but giving this whole working stiff thing a go. You make friends with people by the printer and you learn how long you’re realistically able to waste in a bathroom cubicle on your phone before colleagues start asking questions or leaving packets of Senokot on your desk*. But it still doesn’t feel right and going in every day with this false sense of cheeriness is wearing you down. This isn’t good for you.

Always prepare a strong excuse for when you’re caught perched like a hatching hen on a toilet.

Acknowledging The Bell:
Finally, even though it has been clanging non-stop, you listen to the bell. This isn’t working out. It might be you, it might be them, but it’s time to see other employers. You want to do this as tactfully and gracefully as possible- in secret and behind your current employers back.

Starting To Search:
This is a long and gruelling process, I will not lie. You have to relive sending out your CV, hearing nothing for months, eventually getting a call from a softly spoken HR person named Patrice, though only to tell you that they’ve, ‘unfortunately just hired someone else for a job you would’ve been perfect for’. They say they’ll retain your CV for any future opportunity that arises. Yeah sure, we’ve all heard this before, don’t toy with my heart Patrice! Tell it like it is! The one saving grace is that when you did this before, you were unemployed. Now at least you’re in a slightly better position. 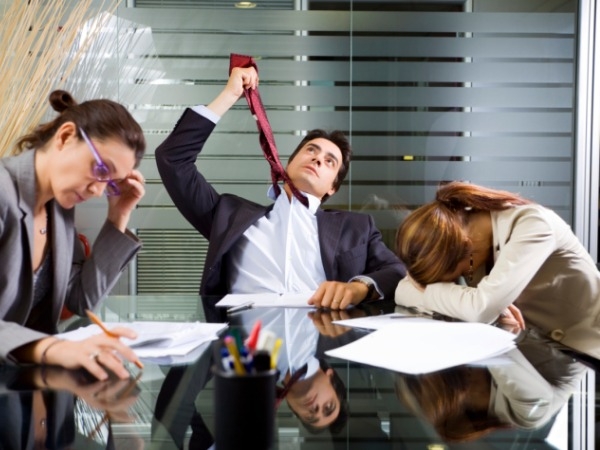 “You’re not gonna reach the ceiling fan from there mate”.

The Waiting Game:
It’s like waiting for them to text first. They never ever do and you kill yourself wondering, “what did I do wrong, why don’t they like me?”. Whatever, you didn’t want them to call anyway…why haven’t they called yet???

Losing Hope:
By now you have sent out your CV to a hundred different places, signed up to four recruitment agencies and are seriously considering just becoming a florist because at least then you’d smell like flowers. Work isn’t getting better and getting up in the morning is a constant struggle. You’ve lost your path a bit. You thought you could make it work or that leaving would be easier. But you still have to go in every day. At least Alan has stopped hazing you.

Remember to gaffer-tape stress-balls to both your hands to help alleviate those workplace woes.

Regaining Hope:
You are better than moping. You have so much else going on apart from work. You have to tell yourself that there is more out there, you are fine just the way you are! Just because the ability to hit the note at the end of “Take on Me” isn’t an employable skill for a 9 to 5, at least until A-Ha start auditioning for backing vocalists again, doesn’t mean it’s not a cool thing to be able to do. You have tons of friends and things you love about life that just don’t exist inside the walls of that office. Focus on those. It’ll make everything seem a little brighter.

Finding A New Job:
And then it happens; you see an ad and you think “what’s the worst that can happen?”. You see what the prospective job wants from you and you try to tick those boxes. The feeling of “yeah I can do this” returns, only this time maybe it’s not so misplaced. You send off your application with a hope and prayer and if the stars align, you get that call to come in for interview and just like that, there’s a new spring in your step. Now all you have to do is find out where those pesky bathrooms are in here…

*No advertising money has changed hands, other intestinal de-cloggers are available.

This page informs you of our policies regarding the collection, use and disclosure of Personal Information when you use our Service.

Information Collection And Use

Cookies are files with small amount of data, which may include an anonymous unique identifier. Cookies are sent to your browser from a web site and stored on your computer’s hard drive.

We use “cookies” to collect information. You can instruct your browser to refuse all cookies or to indicate when a cookie is being sent. However, if you do not accept cookies, you may not be able to use some portions of our Service.

We may employ third party companies and individuals to facilitate our Service, to provide the Service on our behalf, to perform Service-related services or to assist us in analyzing how our Service is used.

These third parties have access to your Personal Information only to perform these tasks on our behalf and are obligated not to disclose or use it for any other purpose.

Links To Other Sites

Our Service may contain links to other sites that are not operated by us. If you click on a third party link, you will be directed to that third party’s site. We strongly advise you to review the Privacy Policy of every site you visit.

We have no control over, and assume no responsibility for the content, privacy policies or practices of any third party sites or services.

Our Service does not address anyone under the age of 18 (“Children”).

We will disclose your Personal Information where required to do so by law or subpoena.